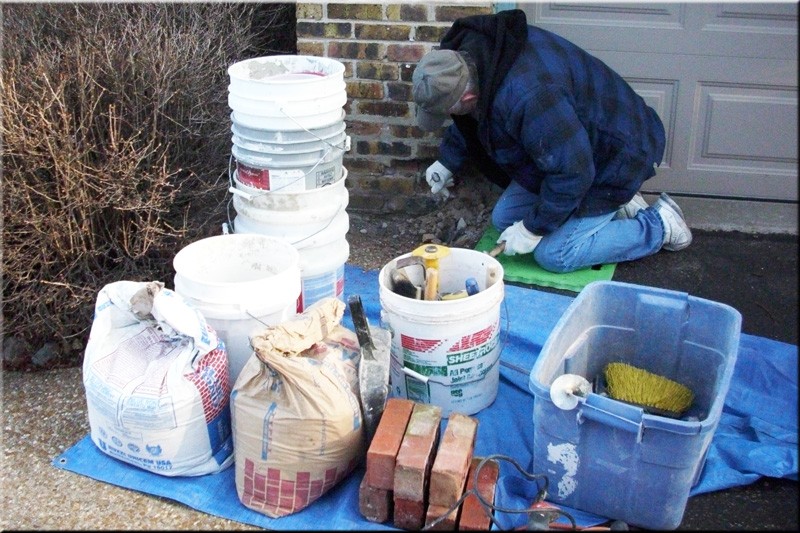 A brick repair consists primarily of removing old damaged bricks and replacing them with new ones. When bricks get cracked or worn out the best methods to repair the brick wall are to either simply chisel or hammer out the existing bricks and replace them with new ones or to mortar in the cracks to reinforce the bricks. In contrast to tuckpointing, brick repairs focus primarily on repairing or replacing the actual bricks themselves rather than the surrounding mortar. While a repaired brick and its new surrounding mortar might be tuckpointed to give it a clean cut as well as to match the cut and style of the bricks around it, a brick repair deals primarily with replacing the actual broken brick itself.

Brick repairs are a good way to give an old, cracking brick wall a makeover. Combined with tuckpointing a brick repair can improve the structural integrity of a brick wall and make it look newer and cleaner on the outside. The brick repair process is fairly simple and usually just consists of knocking out an old brick and replacing it with a new one or patching up an existing brick. A brick repair is a safe, quick, and effective way to make any brick wall more structurally sound and aesthetically pleasing.

At Delta Tuckpointing we have been doing brick repairs for over two decades. Our masonry experts have many years of experience and we always guarantee prompt service and the utmost quality on all brick repair projects. 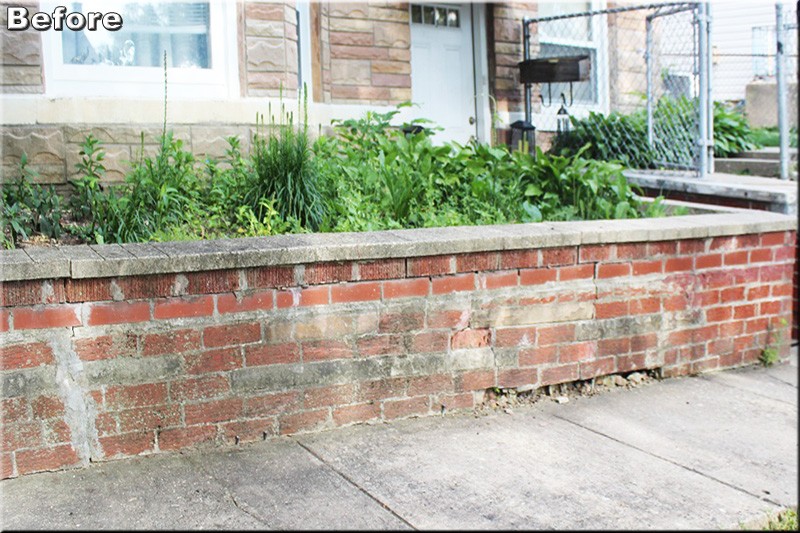 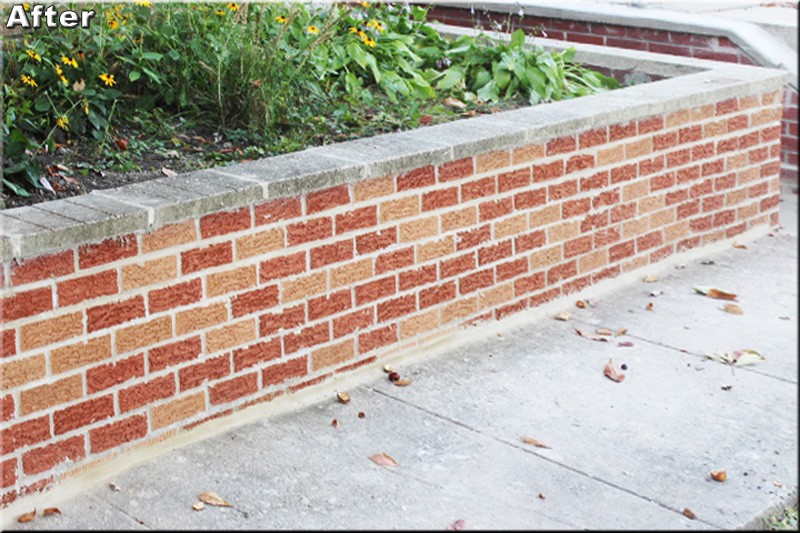 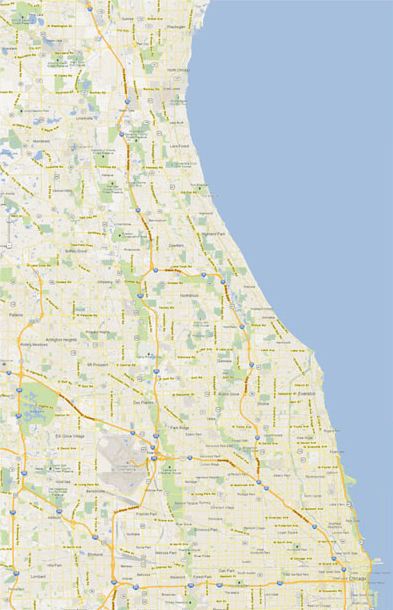 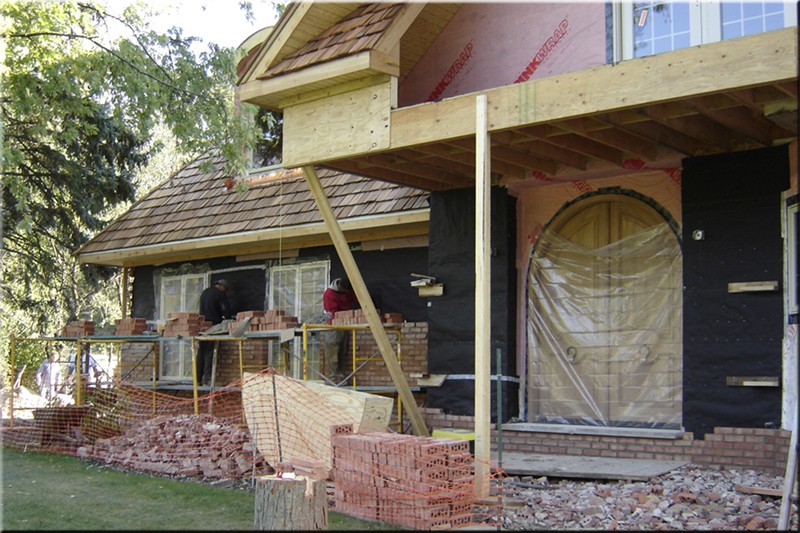 This home was being remodeled and needed a brick repair on the entire front wall which was old and crumbling. We were able to rebuild the entire front and give this home a fresh new brick wall. Though this is a larger scale “brick repair” sometimes an entire wall needs to be redone in order to fix existing damage. 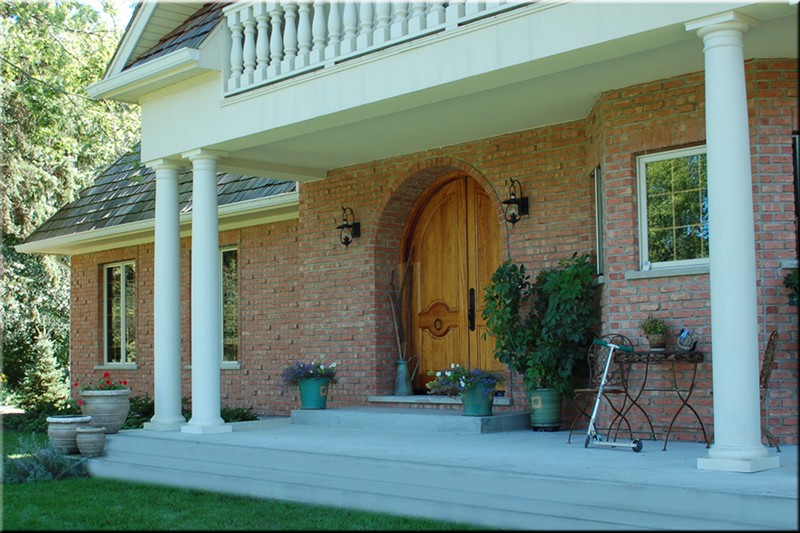 The brick repair is complete and now the new bricks have a sharp, clean look that complements the style of the rest of the house. A new brick wall can last and look good for decades. While more heavy-duty than just a regular “brick-repair” a whole wall rebuild is a good idea during larger remodeling projects if the old wall is in very poor shape. 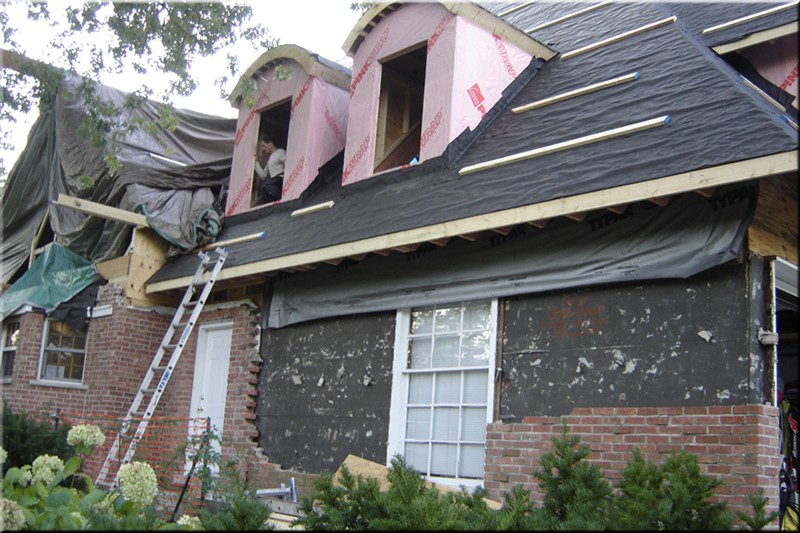 Brick Repair on Garage – Before

Here we see the garage brick wall before its brick repair. The old wall is still partially visible but we can see that a lot of the bricks along the edges have started to crumble. A full brick repair and wall rebuild will make this brick wall and home look great again. 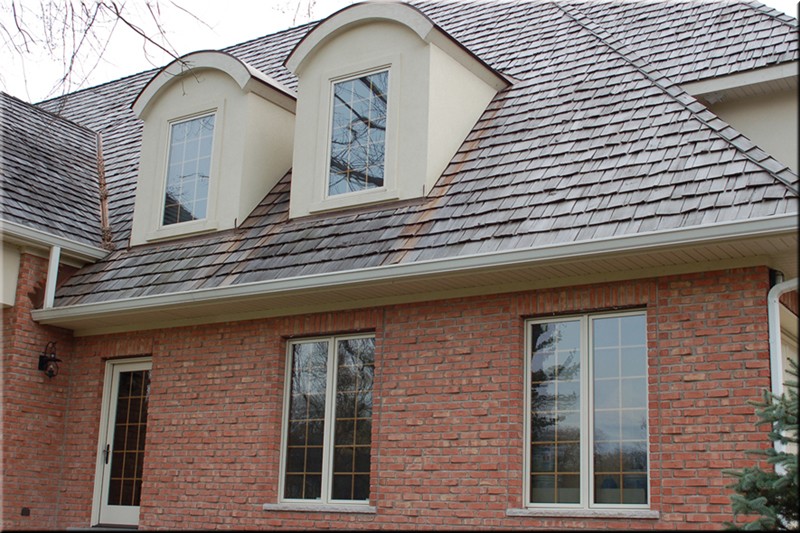 Brick Repair on Garage – After

The brick repair and reconstruction is complete and we have a completely new brick wall. We can also notice that there are new window and door alignments that did not exist previously. A brick repair or wall rebuild is a great idea if you are redoing your entire home and want new configurations for doors and windows to go along with your new repaired and installed bricks. 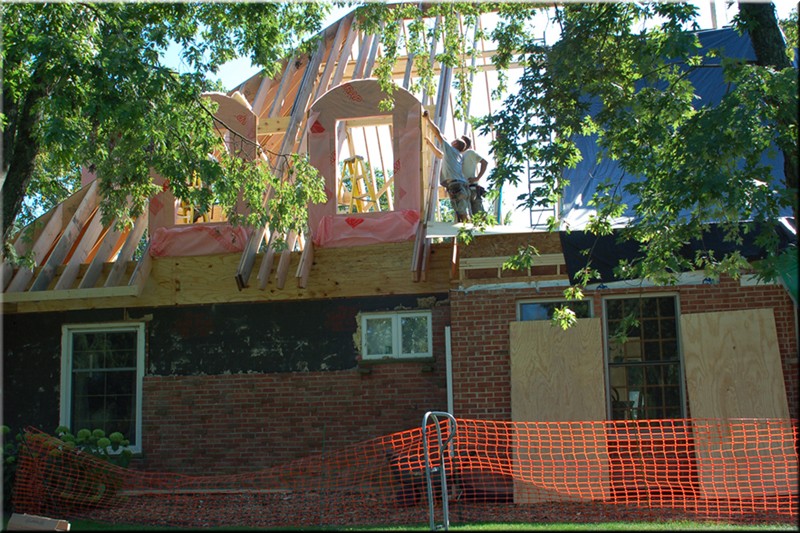 Brick Repair on Wall – Before

Here again we have a brick wall that needs a brick repair and rebuild. The old bricks and window configuration is still visible and we can see that the older bricks look a bit worn out. The addition project as well as the window remodeling gives us the perfect opportunity to do a full wall brick repair. 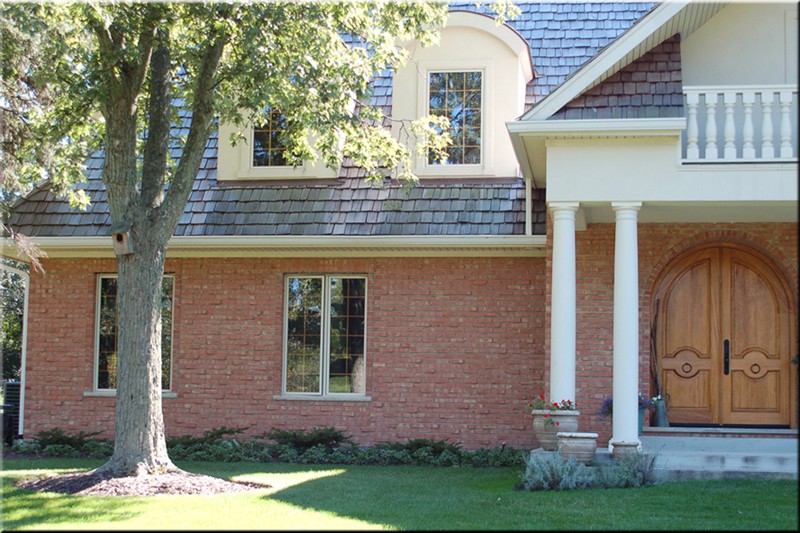 Brick Repair on Wall – After

The brick repair work as well as the entire home remodeling project is now complete. We have an entirely new brick wall up and the new bricks are clean and healthy and perfectly tailored to the new window and roof configuration. Our full wall brick repair was a great success and helped make this home beautiful.

This brick wall is literally falling apart and is in desperate need of repair. There are cracks running all through it and most of the bricks are damaged or otherwise unstable. This wall needs a full brick repair 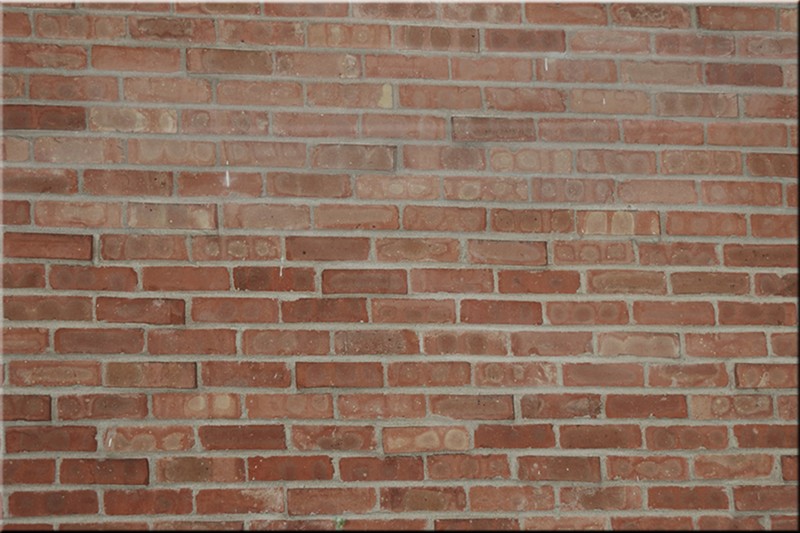 This is a brick wall after the full brick repair. We replaced pretty much the entire wall and now we have a new, fresh, solid wall that looks healthy and is structurally sound. Many times bricks and brick walls are in such bad shape that replacing the entire thing is the only way to repair the bricks and the wall. 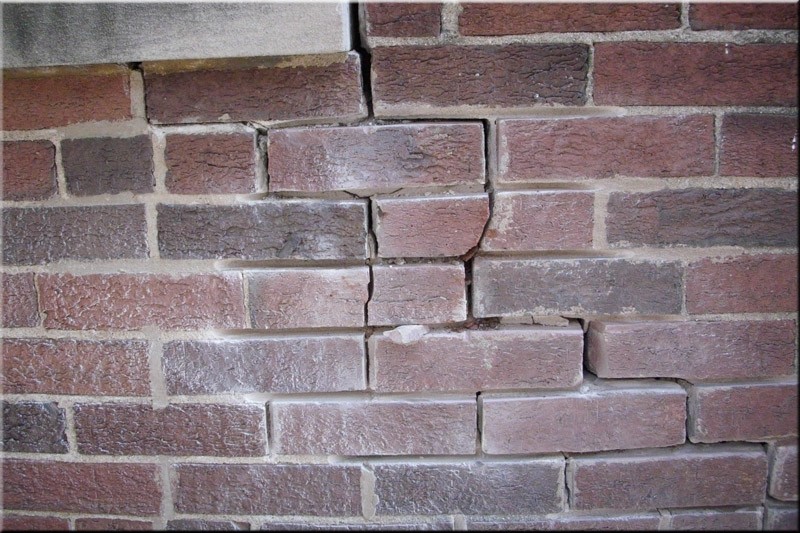 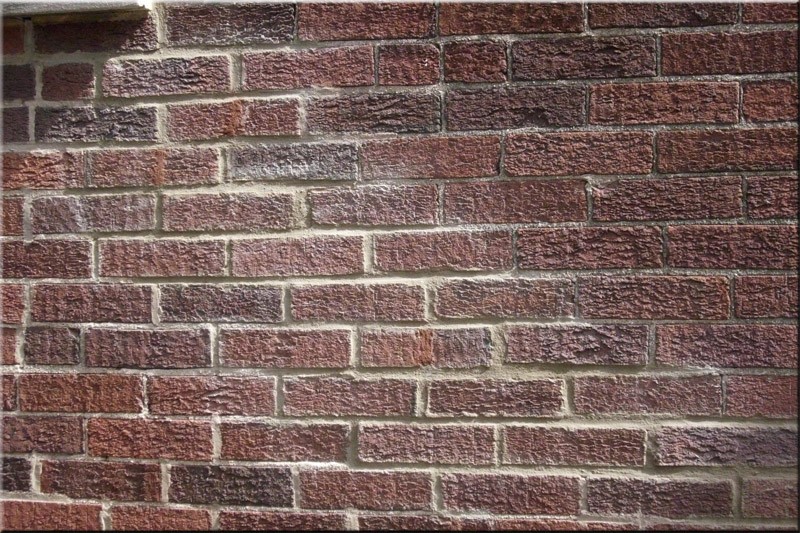 The brick repair was very successful and we can see that the damaged and loose bricks have either been replaced or patched up. As a whole this entire wall now looks new and healthy and is structurally more sound due to the brick repair. Whether or not a brick is completely replaced or just patched up during a brick repair generally depends on the condition of the damaged bricks as well as on the condition of the surrounding area. In this situation both methods were employed. 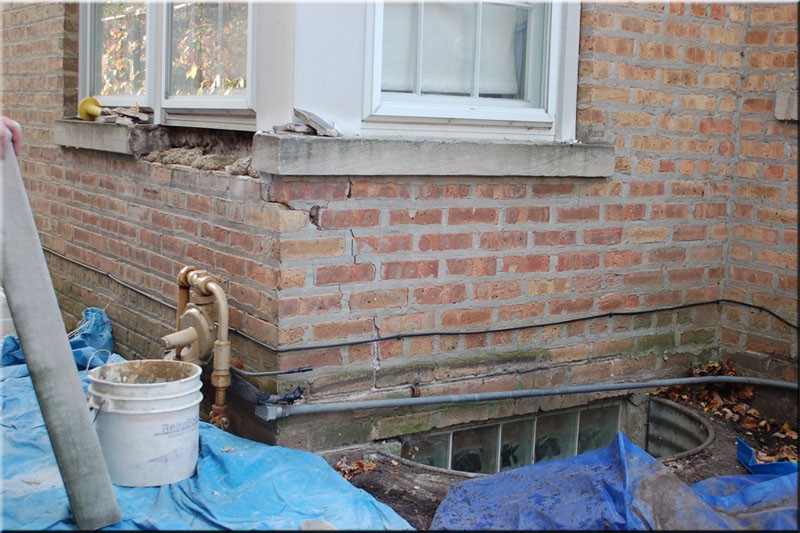 A brick repair is necessary here to fix this brick corner and the window sills on top of it. The bricks and mortar are cracking, causing leaks and drafts which are getting into the house. The cracking corner also makes the windows unstable and if left unchecked can cause greater drafts and damage. A standard brick repair project will greatly improve this situation 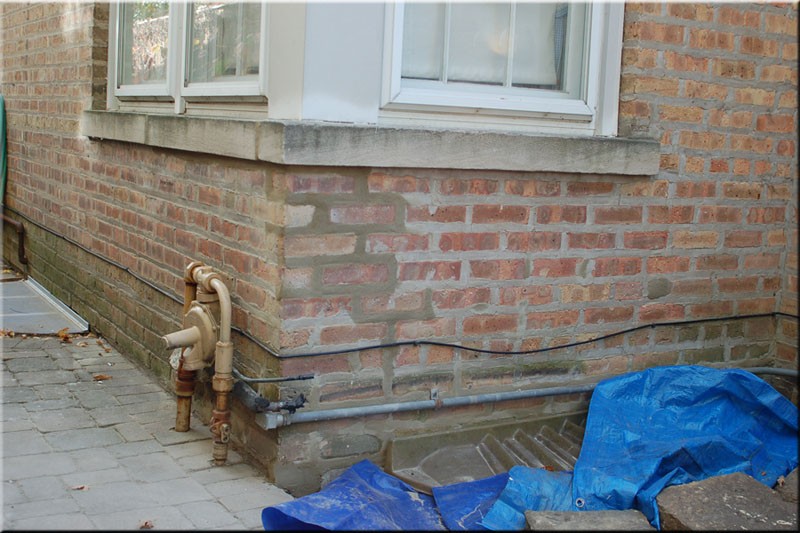 After the brick repair is complete we see the corner drying. The mortar is still wet , but once it does dry it will bond and match the rest of the bricks. The cracks have all been removed or sealed and the window sill has also been fixed. This corner is now structurally sound, looks great, and should no longer cause leaks or drafts. 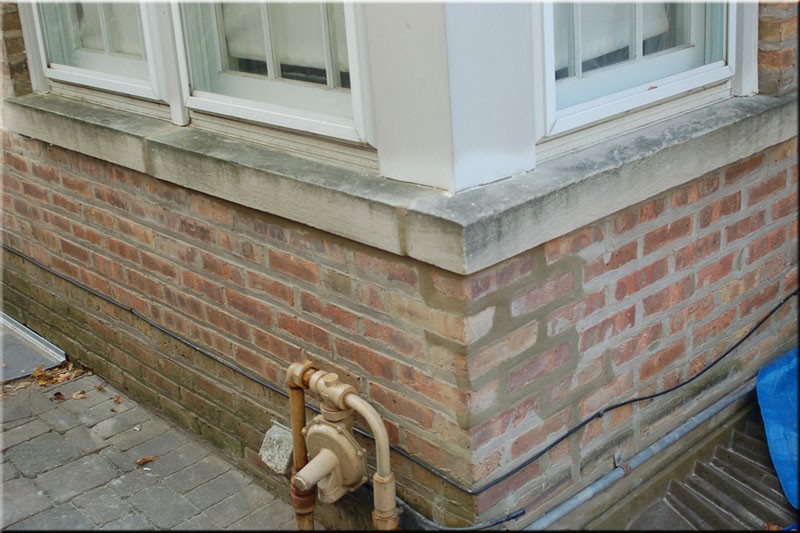 Here is our completed brick repair shown from the side. We see that the bricks, window sill, and mortar are bonding well with the adjoining sections and soon this corner will be dry and match the rest of the building. This repair was relatively inexpensive but should protect this brick corner from leaks and drafts for years. 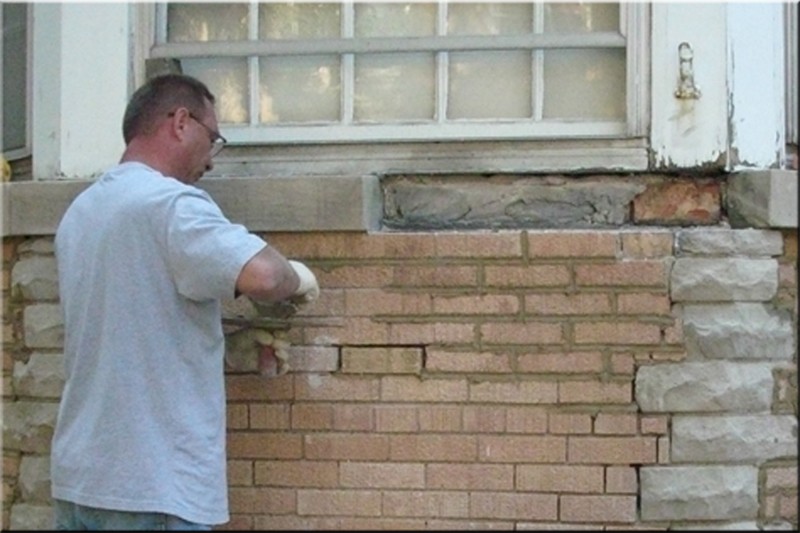 Here a brick repair underneath a window sill is in progress. This brick repair project required us to not only repair the bricks in the wall but also the stone slab on top of the wall that supported the window sill. We can see all the cracks in these bricks and how unstable they look. These bricks were in bad need of a repair but our project should restore them back to good shape. 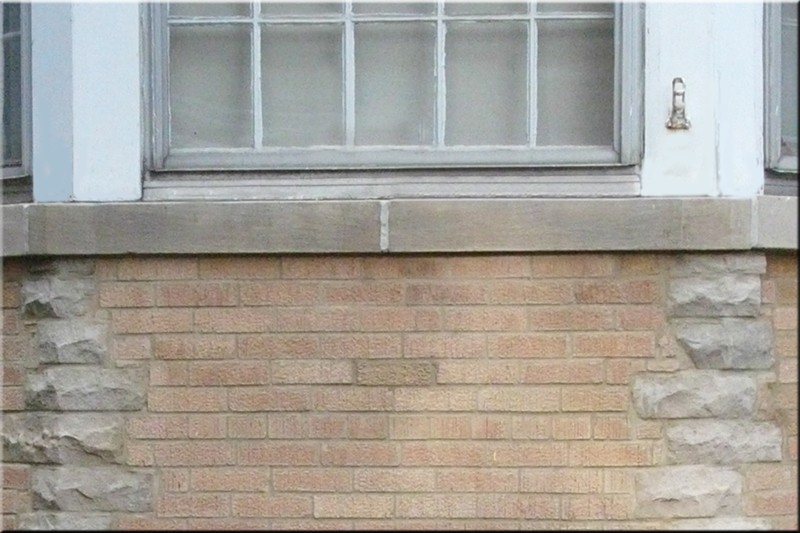 The brick repair on this brick wall is complete. We see that the stone slab on top is back in place and that all the bricks and mortar that were earlier cracked are now repaired and in great shape. It’s important to make sure that your bricks are in good shape because a crumbling wall will only get worse over time. A brick repair helps preserve your brick walls. 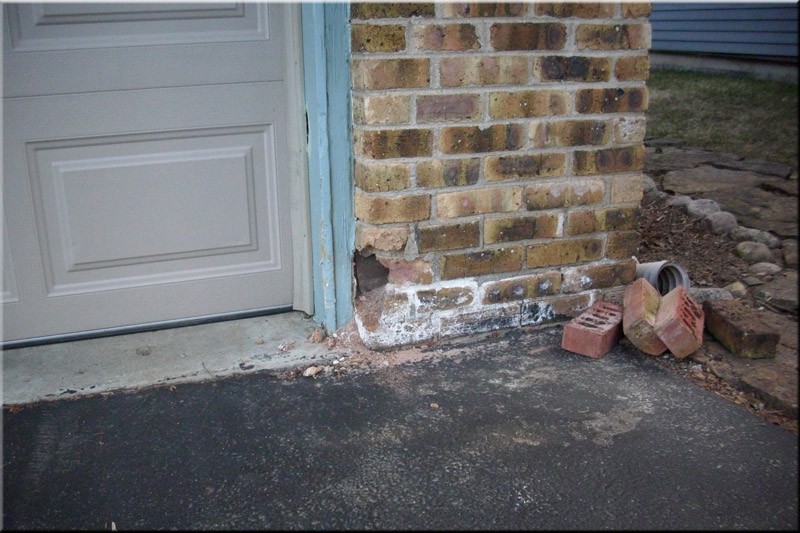 Brick Repair on Right Corner – Before

A brick repair is required for the right corner of this garage that has crumbling and broken bricks. This kind of damage both compromises the structural integrity of the building and also makes the garage look old and run-down. A brick repair project will take care of both problems. 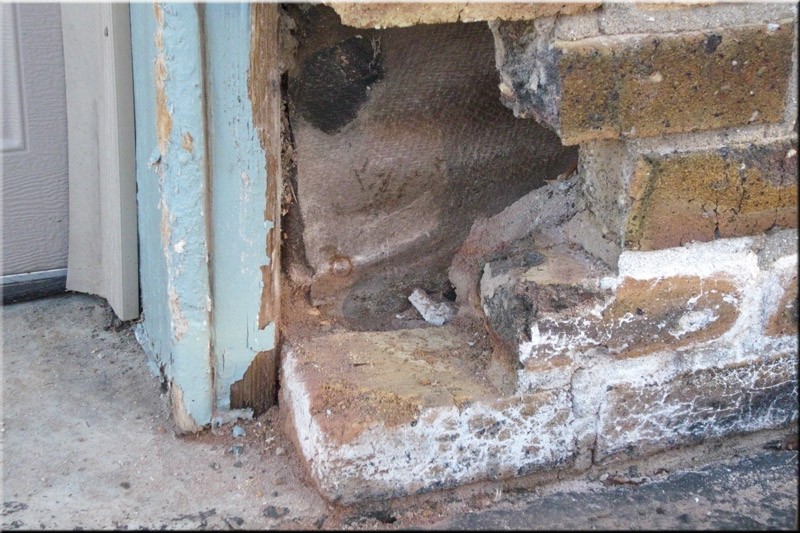 Brick Repair on Right Corner – During

To begin the brick repair here we first knocked out the old bricks. We can see the adjoining brick which are in relatively good condition surrounding the area where we are going to put in new bricks. Our brick repair will fill this gap in nicely. 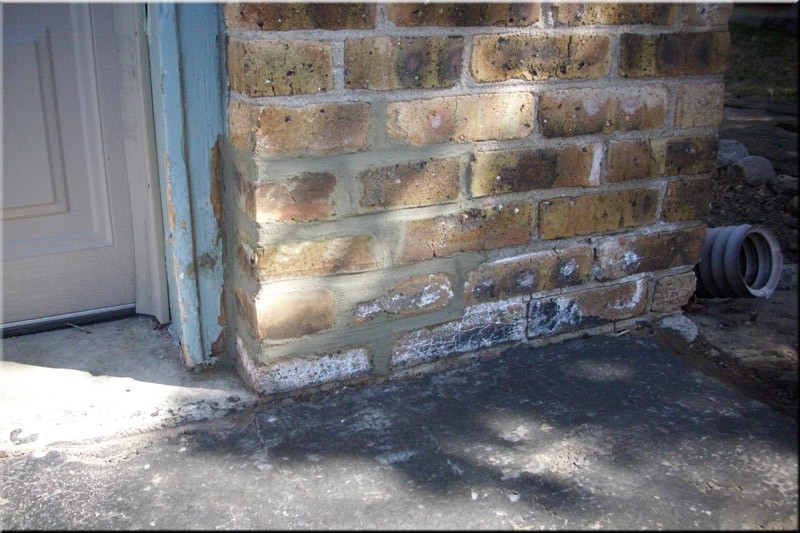 Brick Repair on Right Corner – After

Our brick repair went smoothly and we now see that the gap where the cracked and damaged bricks had been is now filled in with new bricks and mortar. This brick repair will help the corner of this garage hold up for many years to come. 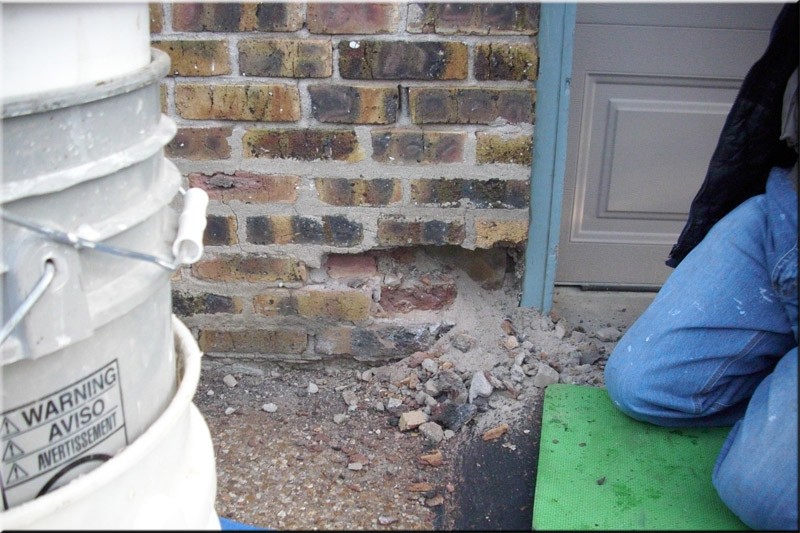 Brick Repair on Left Corner – Before

A brick repair is also needed on the opposite side of the garage. Just like on the other side this corner has some badly damaged bricks that need to be repaired. Most of the bricks here have either cracked or crumbled and need to be completely replaced. 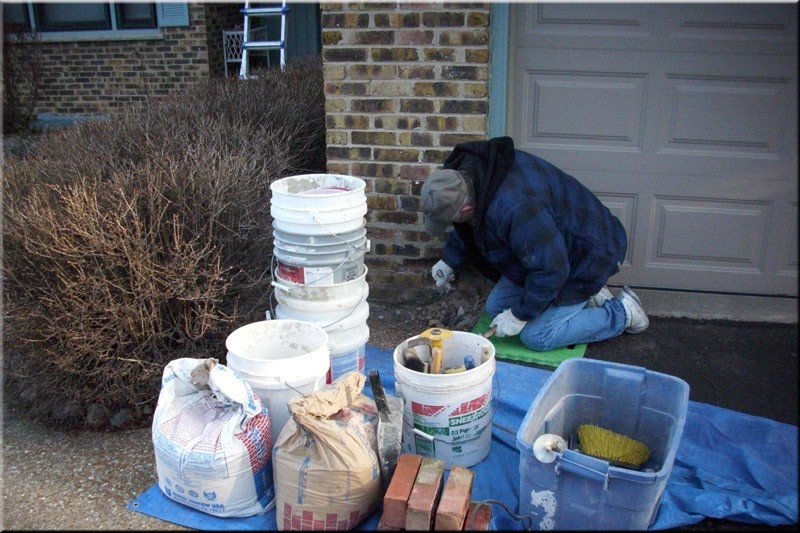 Brick Repair on Left Corner – During

To begin our brick repair process the first step is to remove all the remnants of the old cracked bricks. Here we have begun to do that by chiseling and hammering out all the loose, left over debris from the previous damaged bricks. 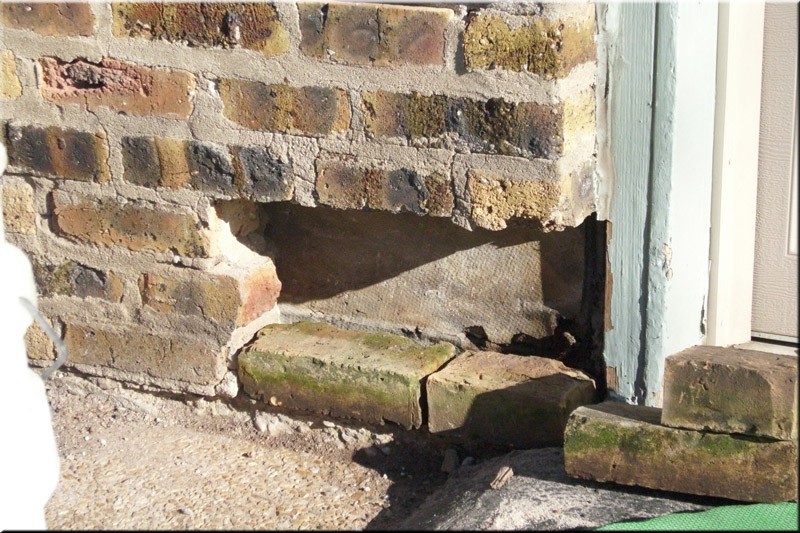 Brick Repair on Left Corner – During

Our brick repair project is progressing as we see in this photograph. All of the old damaged bricks have been removed in preparation for the next step of the brick repair process where we install the new bricks. 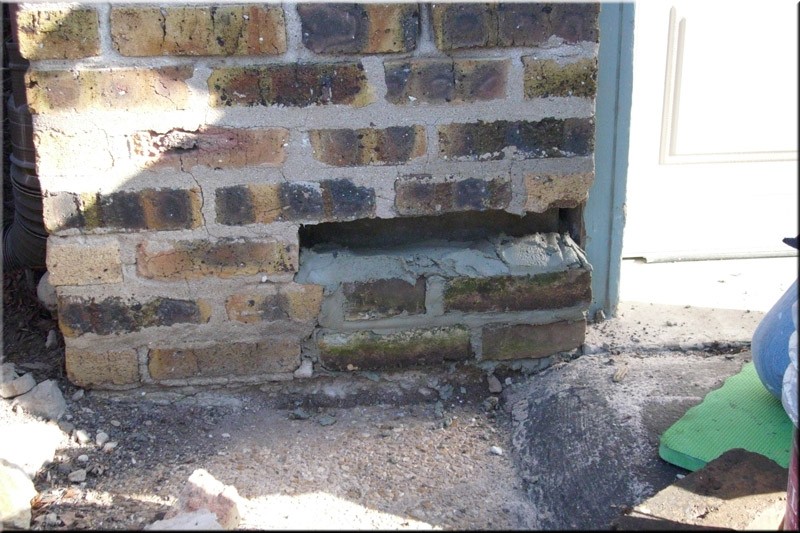 As the brick repair progresses we see that the first layer of bricks has been installed, leaving now only a one row gap at the top. Our brick repair project is half-way done. We only have a few more bricks to install and the lower left corner of this garage will be fully repaired.

We are finishing up the brick repair. We still need to apply mortar to the new bricks before installing them into the wall. 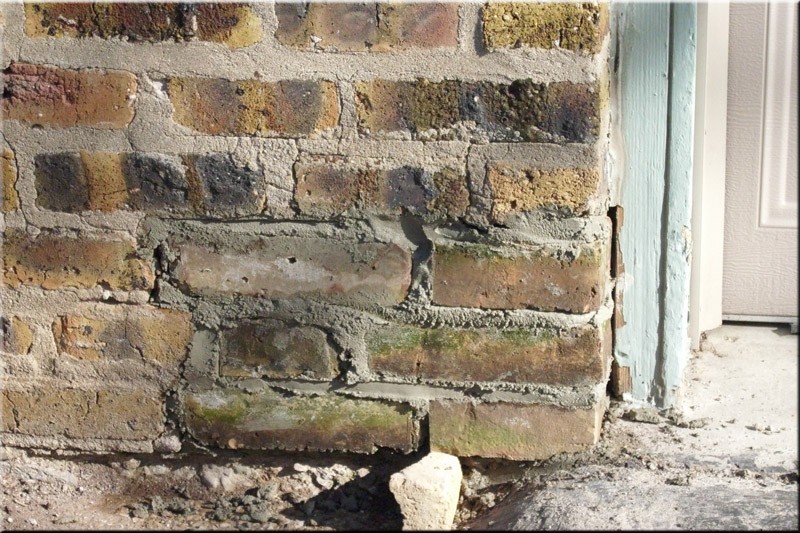 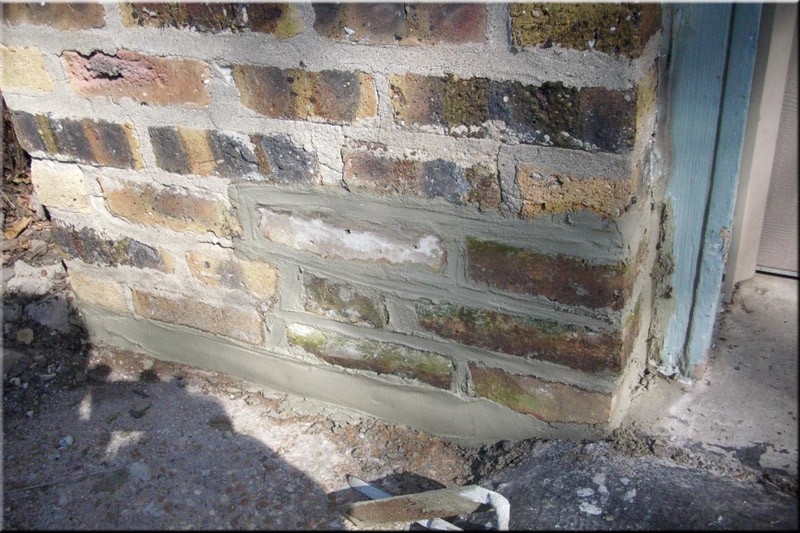 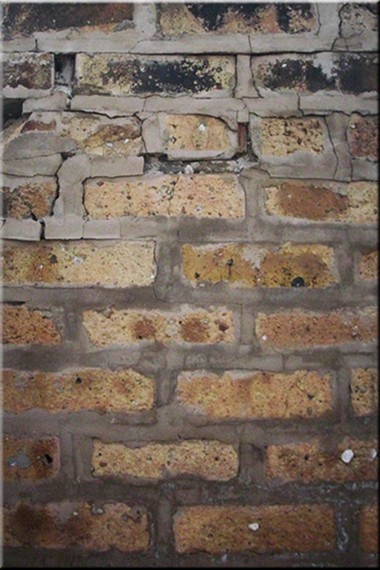 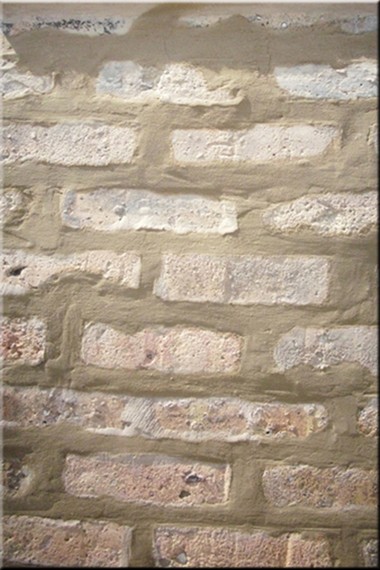 A brick repair was needed here as this brick wall had old crumbling bricks and chipped mortar. We removed the old bricks and mortar and replaced it with fresh, whole bricks and new mortar. The brick repair made the wall look neater and improved its structural integrity. A little bit of grinding at the end gave the bricks a smooth, clean, grime-free look.
Brick Repair on Chimney

Brick repairs can also be done on chimneys. A
chimney repair generally consists of a joint brick repair
and tuckpointing. Here we see a brick repair being done on this
chimney. The original brick was knocked out and now
a new brick is getting mortared in in its place.

Does brick masonry require any maintenance?

You may think your building does not require Masonry repair in Chicago.  However, although bricks are thought of as one of the strongest and longest lasting masonry materials, like others building materials, we must keep in mind that they require maintenance.  As long as they are properly maintained they remain attractive and functional for years and even decades.  Observation is the most important part of maintenance.  Be sure to examine bricks regularly in order to notice any defects as soon as possible.  Structural damage can likely be minimized if issues are addressed immediately. Delta Masonry Tuckpointing is your go to for masonry contractors in Chicago.
There are four principal rules to brick maintenance analysis prior to masonry restoration in Chicago.